Background
The topic of the workshop is building the connection between national and international climate governance. In the early days of the international climate change regime the dominant idea was to set a global goal and distribute the effort required to get there over individual countries, to be implemented nationally through the country’s own policy package. The Kyoto Protocol was shaped along those lines, although countries did come to the table with specific ideas on what their share should be. After seeing the problems with applying this model for further steps to address climate change amongst a larger group including emerging economies and other developing countries, there now is a convergence to a model where nationally determined actions are the basis for an international agreement, with a system of “pledge and review” as the main mechanism to generate adequate collective action. This gives a central role to nationally determined action plans and to an international system for reviewing the adequacy of the proposed actions, with the universally agreed 2°C limit to global mean temperature increase as the benchmark for the collective impact of the national plans. Several proposals are now emerging of how such a pledge and review system could work in practice1.

How would pledge and review work out under current circumstances?
The dominant view in most countries in formulating national climate change plans is that they risk undermining economic growth, development and poverty reduction. Particularly in economically difficult times this leads to plans with low climate ambition or even weakening of earlier plans2. In that light it is likely that national pledges for the period till 2020 will not be strengthened significantly, and that pledges for a new treaty after 2020 will be weak and together not adequate to get the world back on a trajectory to 2°C3.

Current pledges for the period till 2020 are also lacking specificity regarding the national policies that will be implemented to get to the desired outcomes. It is likely that pledges for after 2020 will be similar, so that it will remain unclear what part of the national potential to reduce GHG emissions will be tackled. As we need rapid global emission reductions after 2020 to get back on a 2°C trajectory, not having full insights in what the potential for reduction and the accompanying policy options are in all countries will be a major obstacle.

The third problem is the way the thinking on equity has shaped up. The dominant view amongst developing countries is to look for a set of principles, more recently referred to as an “equity reference framework”, with which countries can determine what a fair contribution to a global effort would be. Apart from the problem of getting universal agreement on such a framework, the implication of this approach is that countries will only look at that part of their mitigation potential they consider to be their fair share. This will prevent to show the full potential available in countries and will thus make it hard to investigate if the untapped potential in countries can be tapped through international support, while it is clear that the full potential is globally needed to get back on a 2°C trajectory4.

A new paradigm for the relation between growth, development and climate action
There is growing awareness that there is a way to reconcile growth and development ambitions and effectively dealing with climate change and other pressing global issues: it is called Inclusive Green Growth. It is growth that ensures natural resources are used in a sustainable manner and planetary boundaries are respected. The OECD, the Worldbank, Asian Development Bank, African Development Bank, UNDP, UNEP and other international institutions5 have convincingly demonstrated that an inclusive green growth strategy is a much better guarantee, also for developing countries, to secure the future wellbeing of people. Thinking this through at national level, transforming national development strategies and translating this into national green growth plans would show a wealth of opportunities to grow economically while maintaining or getting to a low emissions, climate resilient and resource efficient economy. Based on such national green growth plans6 countries will be able to come forward with more ambitious pledges on climate change action than what we can expect under current circumstances. It means approaching economic, development and climate change issues on an equal footing, looking at the multiple benefits that can be achieved. This would avoid a “climate only” or “development only” approach that could lead to insufficient attention to either development or climate issues. In addition, international cooperation will become a positive force in realising national green growth opportunities, which could positively influence the international negotiation dynamics.

Policies as the key to capture emissions reduction potential in key economic sectors
Identifying the potential to get to a low emissions economy or even identifying what outcomes are aimed at in the various economic sectors is a good step to a national plan. However, the proof of the pudding is to identify how this potential and these outcomes can be realised in practice. This requires specific policy instruments to be put in place that create the incentives and disincentives that would lead business and individuals to invest or change behaviour. Without effective policy instruments a national plan is toothless. It is therefore important for any national plan or pledge to include the policy instruments to achieve the goals. There is now a wealth of information on effective policy instruments and how they can be tuned to national circumstances that countries can draw upon7. Ideally countries would present a policy programme in conjunction with an economy-wide target, so that adjustment of the policies over time will be triggered if the need arises. However, having just an economy wide-target without an accompanying policy programme could easily lead to an unambitious target or an unrealistic ambitious target.

A different interpretation of Equitable Access to Sustainable Development
Equitable access to sustainable development, the way BASIC countries have formulated the issue of equity in the climate change context8, can be defined in a different way than what currently has been proposed: not as effort sharing, but as cost sharing. The current effort sharing interpretation has led African developing countries to propose an “Equity Reference Framework” as part of the negotiations towards a new post-2020 climate agreement9. It would roughly work as follows for mitigation contributions (see also note by Xolisa Ngwadla):

The ERF would also include adaptation and finance contributions, to be brought under a common metric, in a manner to be determined.

The ERF approach appeals to those that want to see the equity principles embedded in the UNFCCC to be visibly applied and it could help raise countries’ ambition by “ambitious ” countries “pushing up” ambition of others. However, reaching agreement on the reference framework will be difficult to achieve within the UNFCCC; even moving the responsibility to expert bodies outside the UNFCCC would be very controversial. In addition, the retention of the Annex I/ non-Annex I framework that the UNFCCC Durban decisions on a future agreement did away with, will be very controversial. It is also an approach that disconnects the discussion from the development agenda, a “climate only“ approach.

As an alternative, a cost sharing interpretation of the “Equitable Access to Sustainable Development” would work as follows:

The advantage of such an approach is that the debate of what is equitable could take place on the basis of specific policies and interventions in the country and not in the abstract when discussing equity principles. The other big advantage would be that the full potential for emissions reduction would be visible and bilateral and international financial resources to tap that potential could be more easily mobilised. The approach links the development with the climate agenda and has therefore a better chance that countries see the opportunities for low carbon, climate resilient green growth, allowing them to be more ambitious in their climate actions. The model is comparable to the South African analysis performed in their LTMS exercise10 (see figure). 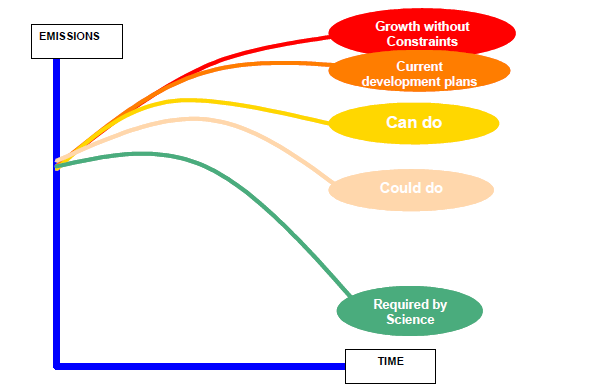 Implications for a global regime
Giving the three elements discussed above a place in a new climate regime that is being negotiated will not happen automatically, as the contentious negotiations at COP19 in Warsaw have shown11.

The issue of national green growth plans as the basis for determining pledges has been covered to some extent in the Cancun decisions, although it was called “low carbon development plans” at the time12. For developed countries it was mandatory to produce such plans, for developing countries it was “encouraged”. This is too weak a link to the emerging pledge and review system, as current negotiations show. It would be important to have the national green growth/ low carbon development plan as the basis for determining pledges enshrined more firmly in the process to get to a 2015 agreement. Of course more time could be given to least developed countries and those with very low emissions.

The identification of the full mitigation potential and the policies that would make it possible to tap that potential could be made a requirement for the proposals that countries are to make in the run up to the 2015 COP, in the form of agreed guidance13. Differentiation of the time frame for producing such a full potential assessment would be needed, but G20 countries should be able to produce such an assessment well before the 2015 COP, and some other countries probably as well.

The element of identifying countries’ equitable share of paying for the “net” costs of implementing the respective policies would have to become part of the review process, in which other parties and independent analysts could comment on the proposed division “self-paid” contribution from a country in light of its development benefits and in which discussions on mobilising financial assistance to countries for the remaining part could be held. Unfortunately no agreement exists at the moment in the UNFCCC negotiations on whether to have a review process and if so, how such a review process should be structured14. Without a proper review process a new regime that is built on national offers would be seriously weakened.