The Summary for Policy Makers (SPM) of the IPCC Working Group on Mitigation to the 5th Assessment Report ( see http://report.mitigation2014.org/spm/ipcc_wg3_ar5_summary-for-policymakers_approved.pdf ) was approved and the full report was accepted by the IPCC Plenary on April 12 (see http://mitigation2014.org/report/final-draft/ ). What are its main messages? Are these the messages that policy makers need to know? And what is not being said?

What are current trends?
Current trends in emissions, the underlying energy system and efforts to reduce emissions go in the wrong direction: 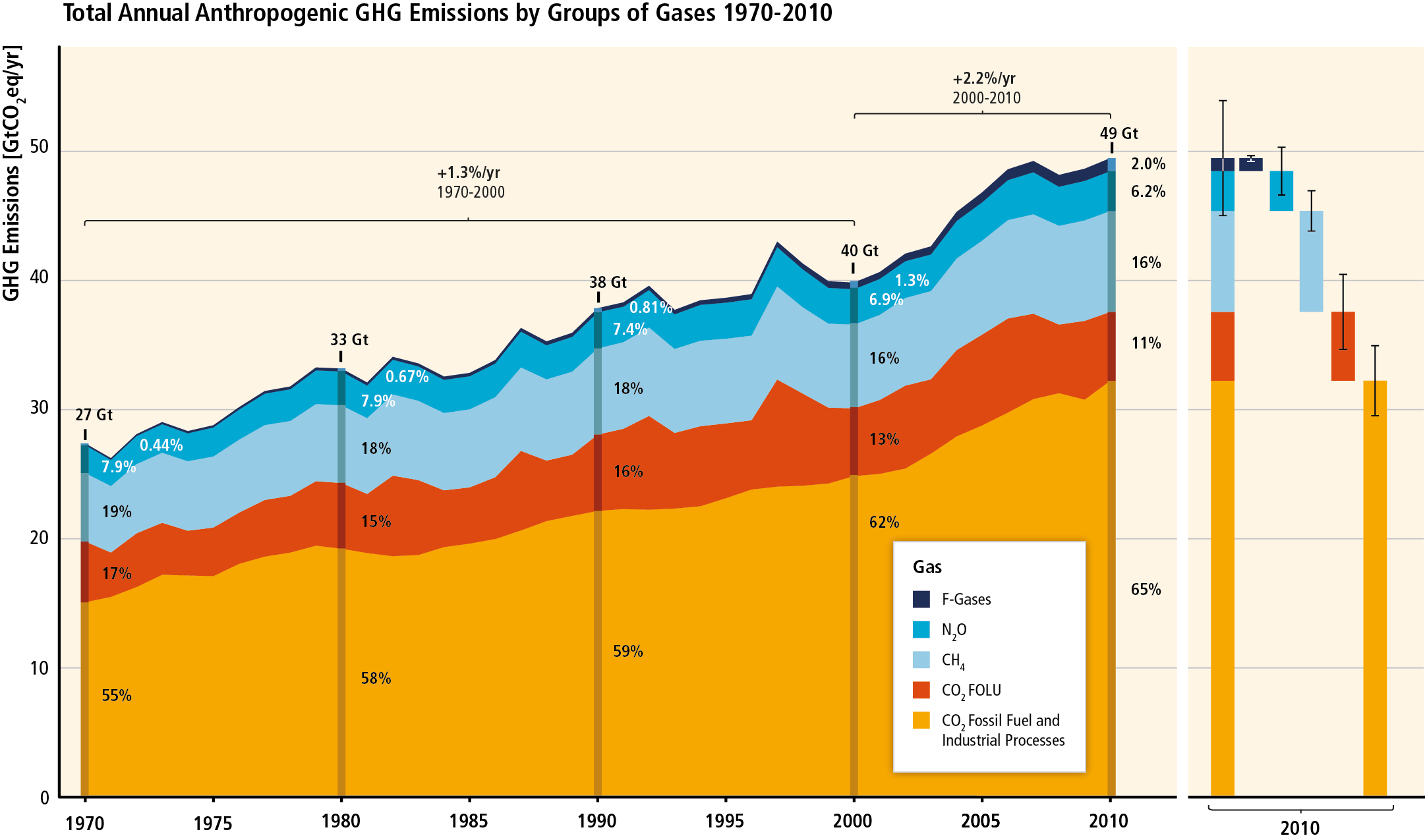 Figure SPM.1. Total annual anthropogenic GHG emissions (GtCO2eq/yr) by groups of gases 1970-2010: CO2 from fossil fuel combustion and industrial processes; CO2 from Forestry and Other Land Use (FOLU); methane (CH4); nitrous oxide (N2O); fluorinated gases8 covered under the Kyoto Protocol (F-gases). At the right side of the figure GHG emissions in 2010 are shown again broken down into these components with the associated uncertainties (90% confidence interval) indicated by the error bars. Total anthropogenic GHG emissions uncertainties are derived from the individual gas estimates as described in Chapter 5 [5.2.3.6]. Global CO2 emissions from fossil fuel combustion are known within 8% uncertainty (90% confidence interval). CO2 emissions from FOLU have very large uncertainties attached in the order of ±50%. Uncertainty for global emissions of CH4, N2O and the Fgases has been estimated as 20%, 60% and 20%, respectively. 2010 was the most recent year for which emission statistics on all gases as well as assessment of uncertainties were essentially complete at the time of data cut off for this report. Emissions are converted into CO2-equivalents based on GWP100 from the IPCC Second Assessment Report. The emission data from FOLU represents land-based CO2 emissions from forest fires, peat fires and peat decay that approximate to net CO2 flux from the FOLU as described in chapter 11 of this report. Average annual growth rate over different periods is highlighted with the brackets. [Figure 1.3, Figure TS.1] [Subject to final quality check and copy edit.] [source IPCC AR5 WG 3 SPM]

Can temperature rise still be kept below 1.5 or 2°C?
All countries of the world agreed in 2010 that temperatures should not increase more than 2oC above pre-industrial, preferably even 1.5°C. With the current trend pointing to 4-5°C or more, will that still be possible?

The report confirms that technologies and practices for all economic sectors are available to bring emissions down in line with cost-effective 2°C scenarios. 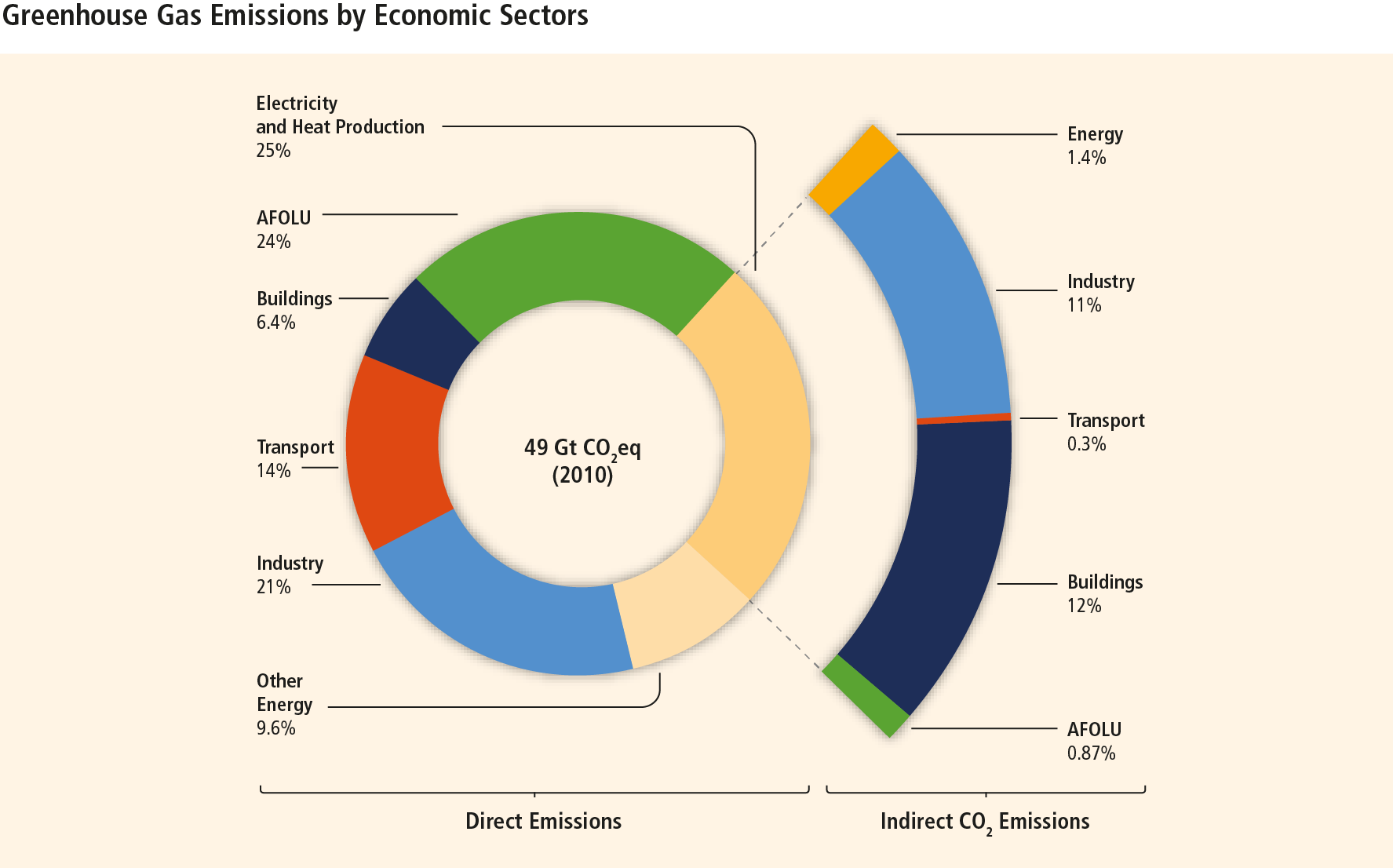 Figure SPM.2. Total anthropogenic GHG emissions (GtCO2eq/yr) by economic sectors. Inner circle shows direct GHG emission shares (in % of total anthropogenic GHG emissions) of five economic sectors in 2010. Pull-out shows how indirect CO2 emission shares (in % of total anthropogenic GHG emissions) from electricity and heat production are attributed to sectors of final energy use. “Other Energy” refers to all GHG emission sources in the energy sector as defined in Annex II other than electricity and heat production [A.II.9.1]. The emissions data from Agriculture, Forestry and Other Land Use (AFOLU) includes land-based CO2 emissions from forest fires, peat fires and peat decay that approximate to net CO2 flux from the Forestry and Other Land Use (FOLU) sub-sector as described in Chapter 11 of this report. Emissions are converted into CO2-equivalents based on GWP100 from the IPCC Second Assessment Report. Sector definitions are provided in Annex II.9.[Figure 1.3a, Figure TS.3 a/b] [Subject to final quality check and copy edit.] [Source IPCC AR5 WG3]

What are effective policy instruments to realize the large reduction potential? 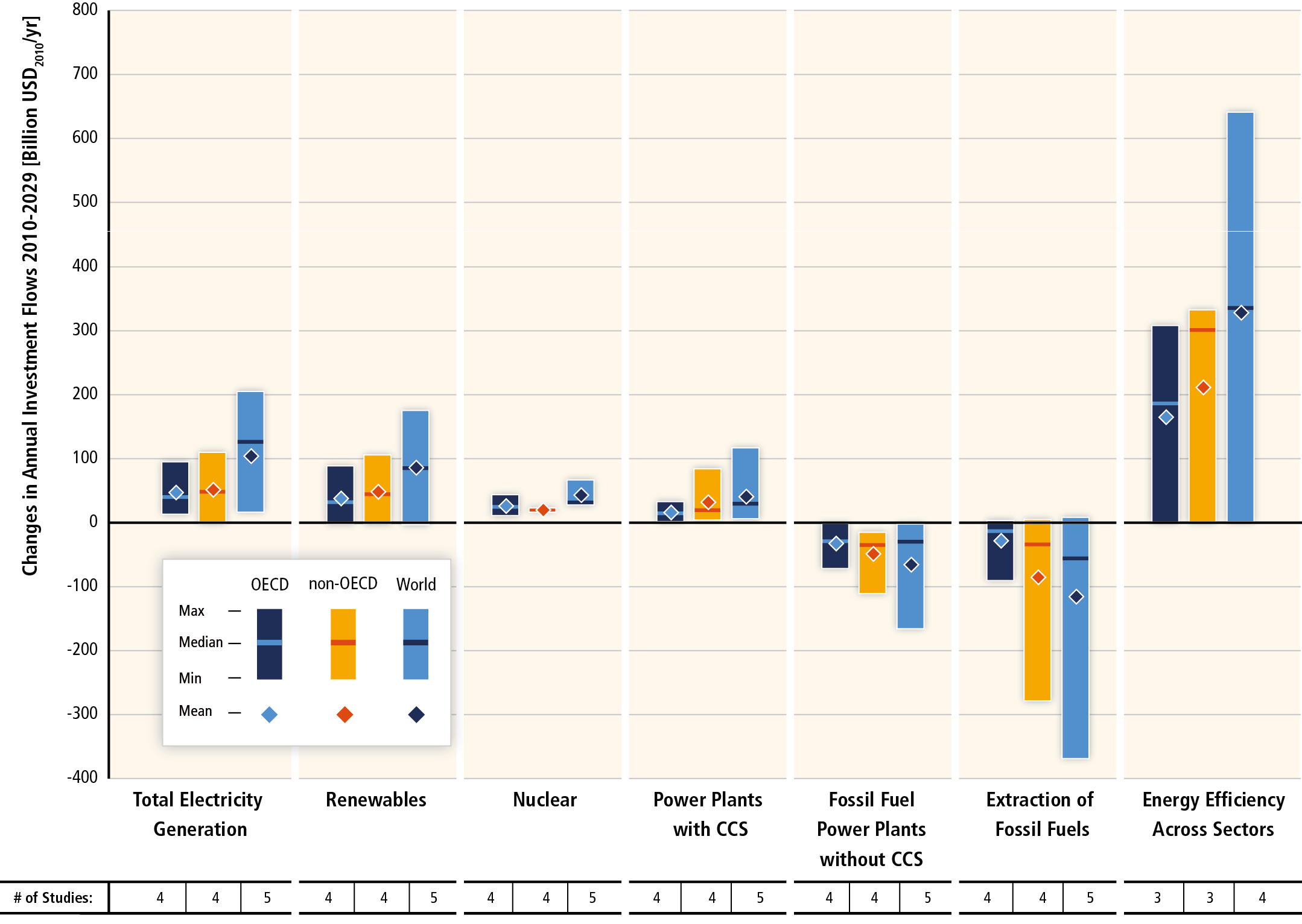 Figure SPM.9. Change in annual investment flows from the average baseline level over the next two decades (2010 to 2029) for mitigation scenarios that stabilize concentrations within the range of approximately 430–530 ppm CO2eq by 2100. Investment changes are based on a limited number of model studies and model comparisons. Total electricity generation (leftmost column) is the sum of renewables, nuclear, power plants with CCS and fossil power plants without CCS. The vertical bars indicate the range between minimum and maximum estimate; the horizontal bar indicates the median.
Proximity to this median value does not imply higher likelihood because of the different degree of aggregation of model results, the low number of studies available and different assumptions in the different studies considered. The numbers in the bottom row show the total number of studies in the literature used for the assessment. This underscores that investment needs are still an evolving area of research that relatively few studies have examined. [Figure 16.3] [Subject to final quality check and copy edit] [source IPCC AR5 WG3 SPM]